Home Uncategorized The Fukuokan Dream and Dashed Hopes in the US

The Fukuokan Dream and Dashed Hopes in the US 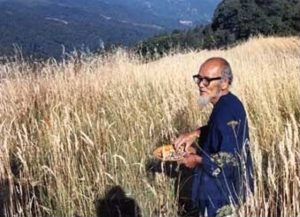 Fukuoka in his field

In Japan, a man named Masanobu Fukuoka made balls out of mud and lots of seeds. He threw them around and they grew abundantly.

A friend of his wrote a book about his success, which appeals to the American desire for easy ways to get a big payoff. Fukuoka and his success have subsequently achieved cult-like following.

Flash forward many years. People are trying this in the US with wildflower seeds. People are afraid to say,  ‘THIS DOESN’T WORK,’ for a few reasons:

What gives? Was the sage-like Fukuoka lying? No. It worked for him.

It didn’t work for you. Let me add a little more depth to the narrative of Fukuoka:

In some of the most fertile soils in the world, a man named Fukuoka made balls out of light and nutritiously rich amorphous silicate minerals from millions of years of volcanic activity and lots of seeds, which for centuries had been bred to produce abundantly in the selfsame soils. And, he tossed these balls around and they grew.

What US Fukuokans do:
In some of the most disturbed and neglected soils on the continent, they make balls out heavy, infertile phyllosilicate minerals and acidic compost mixed with native wildflower seeds which are very picky about their germination and generally not good competitors. They throw these balls out onto barren landscapes and they do not grow.

I’m gonna give you credit for seeing the difference between these narratives.

The burden of growing these challenging species does not end with a seed ball. These seeds need your care. We also never recommend just throwing the seed balls. The plants will need room to root and proper environmental conditions. We work hard to re-educate guerrilla gardeners on the ways to make these nifty things work with native wildflowers on US soils.

Don’t get sucked into the “Throw n’ Grow” mantra. It doesn’t work. Don’t waste thousands of wildflower seeds on hastily made seed-balls following a recipe that you learned from a smiling blogger who just loves butterflies and organic muffins. Growing struggling native species is a battle against the onslaught of invasive species, lawns, and climate change. It’s work. You need to face down that challenge with your trowels and your love for the planet. We’re here by your side. But the bottom line- it’s yours.

So, we sell seed balls. Why?

We’re led by an environmental scientist who gathered a wildly qualified team to assist in the development a way to make these seed balls with wildflower seeds so that they have many of the benefits of Fukuokan seed balls but address the limitations of the environment and the demand for wildflower seed balls here in the US. It’s taken us years of trials and innovations by three staff scientists and a production engineer, including experiments to address the specific needs of different seeds for both production and germination, but we do it, and our seed balls grow well, without wasting seed, your money, and your time.

Other seed ball makers? Fukuokans and enthusiasts. There’s a difference. Where they roll seeds in mud, we go through great pains to control the density and even the placement of the seeds within the seed balls on a species-by-species basis. Our material handling technique minimizes the compaction of the clay and portions the compost into its variously decomposed components. We regulate the pH of the matrix with different fractions of organic material, and we test, test, test. That’s what it takes. It’s not rocket science; it’s biology, it’s soil science, it’s process engineering… and it’s not easy.