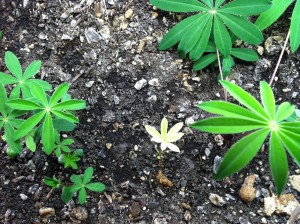 Unlucky lupine… The pale lupin in the center failed to associate with Rhizobium in some nitrogen-limited soil.

Plants need nitrogen, and have to get it from the soil. Unfortunately, many soils don’t have a lot of nitrogen available for plants, and that can limit their growth.  But many legumes evolved a symbiosis with a certain genus of bacteria, Rhizobium.  The relationship between legumes and Rhizobia is quite intimate, and benefits both partners.

Rhizobium cells can live in the soil without plants, but without the plants, they do not fix any nitrogen, they lack the necessary enzyme, nitrogenase.  When a legume seed germinates, if it is fortunate, its roots will come in direct contact with cells of the right species of Rhizobium.  When this is the case, receptors on the root cell walls detect certain chemicals released by the Rhizobium and form a thread-like tunnel into the cell, through which the bacteria travel. Once inside the plant’s root, the bacterial cells rapidly reproduce rapidly forming distinctive nodules on the plant’s root system, and can now gain use of  the plant’s provision of nitrogenase. 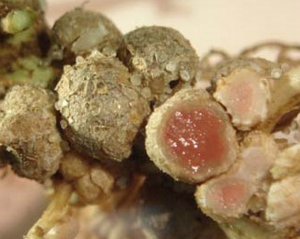 For the plant, atmospheric nitrogen is turned into readily available ammonia, right in the plant root! That’s a cake walk- in a nitrogen-limited system, a plant would otherwise have to invest in a significant root system without Rhizobium.  For the bacteria, the plant provides a steady stream of food sources.
If only people could get along so well!