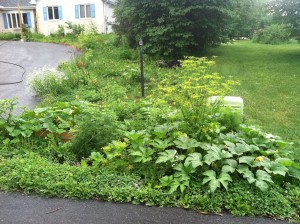 It was a lawn last year…

The front of my lot has a north-west facing steep slope. It isn’t large, maybe 1/16 an acre. The first land owner, in the 1980s, covered it with a dense geo textile and small rocks and planted trailing junipers. In the years since, the junipers have died and opportunistic species have managed to penetrate the geotextile with their fine roots, cementing it to the land. It’s a sorry area.

My goal is to establish perennial species and gradually transition the spot into two areas, a butterfly garden, for the area that gets more sun, and a shade garden, for the area that is a bit more north-facing. I also don’t want to mow the area, and our township has a rather restrictive policy of plants that are not cultured with a specific purpose in mind, must be maintained at less than 6″ tall. Good thing that doesn’t apply to children, too! I petitioned with a conservationist argument that the native flowering species have a purpose as pollinators, slope stabilizers, and soil enriching organisms, but the petition didn’t fly. My goal is to get the perennials going and have a clearly purposeful garden established before the township does its drive-by in the spring.