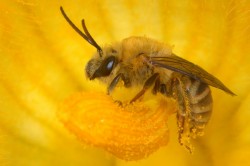 Squash Bee having a fine time of it! Photo by Douglass Moody at the California State University of Fullerton, CA.

Peponapis pruinosa- As we prepare to reap the bountiful benefits of the fall harvest crops that inspired our Thanksgiving traditions, we should be thankful for our native pollinators. There are nearly 4,000 diverse varieties of native bee species in North America that go unnoticed for their vital ecological services. Many native bees tend to stand in the shadows of its popular European cousin the “honey bee,” but in fact native bees have been more effective at collecting pollen years before the honey bee arrived and tend to have a special symbiotic relationship with native plant species. One specific native bee, the Squash Bee, is responsible for providing many of the gourds we associate with Thanksgiving dishes and décor.

Squash Bees, Peponapis spp., are specialist bees who focus their pollination on the Cucurbitacea (squashes, pumpkin, and gourds)  family. The native bee has an expansive range throughout America’s as a result of the commercial use and spread of Cucurbits. The small bee has similar physical characteristic to honey bees, but they are have a larger body build, swift and more effective in flight, and forages for pollen in the early morning. Unlike honey bees, the squash bee are solitary bees and do not have colonies. They build their nest in the soil in close proximity to cucurbit patches and produce one generations per year.  Similar to the honey bee, native bees are being threatened as a result of habitat fragmentation, climate changes, and excessive use of pesticides on agriculture farms. To help the native squash bee population, avoid tilling your garden or bordering areas near your garden. Tilling disturbs and destroys their nests. If you notice small dug out holes around or near your cucurbit plants, this is generally the entrance to their nest. If you are out in your garden early enough you will see them emerge from the holes to tend to their flower.

This year let’s savor every delicious bite of pumpkin pie because without native pollinators, who provide us with the fundamentals ingredients to our Thanksgiving traditions?