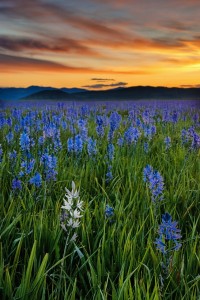 This year, many of us will enjoy a sweet tasting tuber with our traditional Thanksgiving meal.  Although the sweet potato (I. batatas) originated in the tropics of Central or South America, it was rarely used  by native people living in cooler regions of North America. Blue Camas (Camassia quamash), a Pacific North West native wildflower, did provide a bountiful harvest of sweet “potatoes” for many tribes in the region.  Its bulbs become increasingly sweet after a long, slow cooking process, thus they were one of the most widely traded foods.  Despite their considerable economic value, Camas bulbs were sustainably harvested from family owned plots every few years.

Today, the tasty bulbs are uncommon and difficult to find in large numbers.  Unfortunately, many of the traditional gathering sites, including Weippe Prairie and Camas Prairie in Idaho and the Willamette Valley in Oregon, have been lost to agriculture.  The restoration of camas prairies and access to camas bulbs is a priority of many Indigenous groups. At one time, “When camas was in bloom in wet meadows, the flowers grow so thickly that they look like a blue lake” (Murphey 1959:14).